Canada is shifting its economy towards green energy. 60% of its energy consumption is produced from renewable energy resources which mean that there are enough green energy stations in the country which are meeting such a huge demand.

In the next few years, Canada has planned to shift to green energy by its fullest. Currently, it is the 6th largest energy producer and is planning to be at top ranking in the coming years. To do this in real Canadian government is supporting small and big investors to invest in different renewable energy setups and also providing certain benefits.

You may have heard different concepts from people when we talk about shifting the economy to green energy. Like we can’t totally depend on solar energy, there is no sun at night, carbon taxes are not affordable, there is too much to invest and so on. All these dilemmas are mostly from the people who totally rely on oil-producing energy sources and to those who don’t want to do anything for the solution.

The recent green energy programs by the Trudeau government are producing more and more jobs for the economy. It is committed to use clean technologies and be environment-friendly by producing no or less greenhouse gases which are continuously destroying our environment.

In the past year, there were 276,000 people employed in the energy sector directly and supported 624,000 jobs indirectly. If we look at the statistics provided by the government we can see that more jobs are being created in the green energy sector as compared to the fossil fuels. 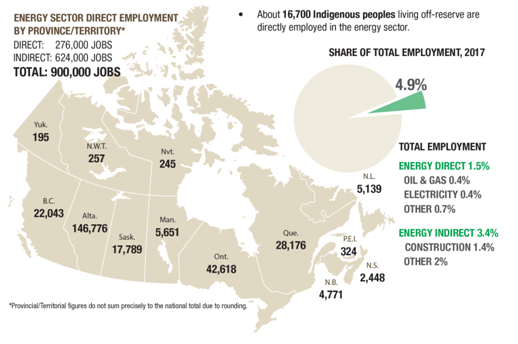 Fossils fuels are depleting and the industries is facing more difficulties by increased taxes, low pays, job insecurities and top of that the guilt of destroying the natural resource and our environment. As compared to it, the green energy program gives the following benefits:

The world is going to COMPLETELY rely on renewable energy by 2050 in Canada which means that there is going to be more jobs in this sector. So people out there, who really want to contribute to the country and to the environment, should gear up because the future is yours!